Welcome to the bakery! Located in the Broadway Village shopping center, Barrio Bread is a true neighborhood bakery that showcases the art and science of Don Guerra’s passion for baking and his commitment to community. Barrio Bread is dedicated to exceptional quality ARTisan bread, created with centuries-old baking techniques and locally grown heritage grains. Barrio Bread loaves are known for a chewy interior and amazing crusts.

Don Guerra
Owner/Baker
Don grew up in the Phoenix area and enjoyed baking with his mother and eating his nana’s tortillas. He attended the University of Arizona to study anthropology and then headed to Flagstaff, Arizona. Don worked in several bakeries before opening The Village Baker of Flagstaff in 1995. A few years later, he moved to Ashland, Oregon to open The Village Baker of Ashland.
After returning to Tucson, Don completed a degree in education and taught K-12 grade students for seven years. As time passed, he yearned to return to the artistry and passion of his baking days and started experimenting with new recipes. A “garage bakery “remodel yielded Barrio Bread in 2009 and the Community Supported Baker was born. Barrio is Spanish for neighborhood, a name he chose since his neighbors were the lucky recipients of his first Tucson loaves. This sense of community is embedded in every aspect of the business.
Don is committed to working with local farmers, chefs, and other food producers to strengthen the local grain economy and grow the local food network. In 2015 he was awarded a USDA Local Food Promotion Grant that significantly helped him to increase collaboration with others and expand production with a new bakery. He has taught a variety of baking classes and presented at conferences and workshops, highlighting his business model and work with heritage grains. Don has consulted in Mexico, Taiwan and throughout the United States.
In 2016 Don was named one of the Top Ten Bakers in America by Dessert Professionals magazine. He also received the Leveraging Your Localness award from Bite Magazine, Good Food Finder USA and Local First Arizona. 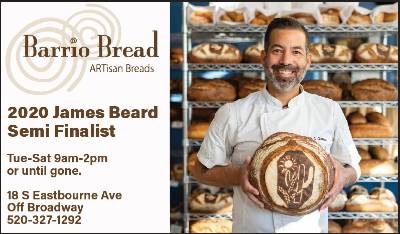 Return to the main RESTAURANTS AND SPECIALTY FOODS page.